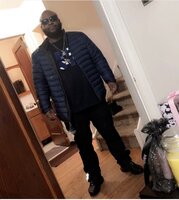 Barry "Pooh" Best was born in Philadelphia, PA, on November 27, 1980, to the late Barry Murdock and Deloria "Evadne" Best. He gained his wings on Sunday, October 31, 2022. Barry was educated in the Camden Public School System. From a very young age, everyone who knew him knew the love he had for his mother. He would try to follow her everywhere she went, and then as an adult, his mom would try to follow him everywhere. At the age of 12, he was in a devastating car accident where he lost his best friend/favorite cousin "Eb" and two friends; Pooh was the lone survivor. It was said he continued to mourn Eb's death.   Pooh was a lover of all animals; he often brought home turtles, and one of his favorite pastimes was feeding stray animals and birds. He was a very generous person. You would often find him giving money to friends and people who were in need. A protector of his family and friends, his mother would often come home to see different friends now living with them.   Pooh was a lover of God at an early age and continued to be committed to praying as an adult. He was a music lover and recently recorded a song with his son Quamir. He loved spending time with his children and mother. You could often find him hanging outside with a plate of his mother's cooking.   Pooh fulfilled his childhood dream of flying on an airplane during a recent trip to Las Vegas. While there, he visited the aquarium and a white tiger exhibit. Being around animals gave him a sense of peace.   Pooh leaves to cherish his precious memories mother, Deloria Best, and Six children, Jaleerah Smith, Jahkirah Best, Ariquasha Dotson, Quamir Coleman, Shavoz'e Ingalls, and Shavont'e Ingalls. Four grandchildren Atori, Armoni, A'si, and Ashaan. Three sisters, Nadirah, Quineice, and Shatoyah. Two brothers, Darnell and Ryan. Seven aunts, Gretchen, Vanessa, Verelyn, Doncella, Jamie, Tracey, and Roshawn. Two uncles, Reggie and Desi. His fiancé Michelle, a cousin he considered a brother Khayree, cousins Snook, Dum Dum, and Bleek, and a host of nieces, nephews, cousins, and friends.