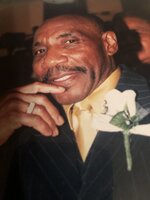 Life’s Story of Walter Rhymes, Jr. Walter Rhymes, Jr. was born on June 16, 1943 from the late Walter Rhymes, Sr. and Annie Lee Wilson of Pelham, GA. While in Georgia he attended the Pelham Public school system. As a young person he loved hanging with his eldest sister; Grace (Gracie) Toombs, she took him everywhere, at times she would even carry him on her back when he got tired of walking. Walter was known as Junior while living and growing up in Pelham, GA. Walter was known to be a people person, he loved to laugh out loud, and tell jokes. Walter married Mary Lou Moore and from that union they had four children. In 1968 Walter relocated to Camden, NJ.; once settled he found employment with Bellmar Furniture Warehouse and there, he worked for over 30 years. While in Camden, NJ he had also began a new life with Jimmae Williams; from that relationship they had 4 children. After that relationship, Walt met Clara Williams and from that relationship they had 2 children. Later Walt would retire from Bellmar Furniture and would continue working for Cooper Hospital in the SPD Department for approximately another 10 years. Walter, AKA “Walt” loved to stay busy, even while working for Cooper Hospital he would Bartend part time. Another one of Walt’s hobbies was Bar-B-Queuing, he loved to play games, shoot pool, shuffle board, or watching his favorite Football teams the Dallas Cowboys and the New York Giants during the football season, and hanging out with his beloved friends. One thing Walt loved to do was to prepare his coffee in the morning, get his newspaper and read all about what was happening in the city. After a relationship with Clara Williams; Walt met Tanya Redd, who was his companion for the last 25 years. Walt, the fun, loving and outgoing person he was, was not a church going individual. However, after having a brief encounter with an illness walking and talking became a struggle for him. One Sunday afternoon after a visit from his daughter and Son-n-Law (a minister) Walt would accept the Lord as his person savior. Later on, another Sunday, they brought him communion and he took part, even stating that the wine taste good. We became filled with the joy of him becoming a part of the body of Christ. Walter Rhymes, Jr’s life spans across many barriers, living through 4 Wars; World War II, Korean Conflict, Vietnam War, and the Gulf War. Walt also lived through the Pre-Civil Rights and Post-Civil Rights Era, which is a testament of the world he lived in. From his life Walter leave to cherish; his loving companion, Tanya Redd, 13 children; Theresa Ann Rodriquez, Albert (Ray) Williams (Laquinta), Brenda L. Anderson (Donald), Sheila Rhymes, Gerry Williams, Tawanay Clark (Te’juan/Deceased), Marvin Rhymes, Jr., Crystal Williams, Tasha Williams, Yalonda Richards (Ricky) Jamone Redd (Deceased), Jarred Redd and a host of grandchildren, great-grandchildren, and great-great grandchildren. Also, his sisters; Grace Rhymes (Toombs), Ada Mae Rhymes Moore, Helen Rhymes, Lanelle Thymes Harris, his brothers; Edward Rhymes, Dickey Rhymes, Henry Lee Rhymes, and Rudy Rhymes.