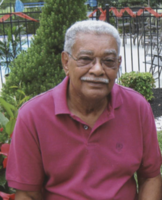 Obituary Sewell S. Hodges, III was born on July 10, 1933 and raised by adoptive parents, Mr. and Mrs. Malachi Coles. Sewell is predeceased by his younger sister, LaRue Hodges Hargrove, whom he adored. Sewell, better known as ‘Stitch’, was born in Philadelphia, but raised in the historical town of Lawnside, New Jersey -- the first independent self-governing African-American community north of the Mason-Dixon Line. Sewell has an intriguing family history. One great grandfather, also named Sewell Hodges, was one of the founders of Lawnside, NJ, while his other great grandfather, Chief Big Foot, was a Native American, well-known in American history for his role in the infamous Battle of Wounded Knee. Sewell graduated from Camden County Vocational School in 1951 with a degree in welding. Barely out of school, he served in the United States Army during the Korean War, traveling to both Germany and Italy. He loved to laugh about his experience with the Italian house mother who cooked for the soldiers. Every night she asked him what he wanted to eat, and as an 18-year-old who had never traveled internationally, he told her that he wanted spaghetti - the only Italian food he knew - every single day. After many, many days of this, she got so frustrated that she told him, ‘I’m not fixing you any more spaghetti, you need to try something else’! That’s how he developed a fondness for Italian food. Sewell caught the entrepreneurial bug early on, owning and running a dry cleaners in Woodbury. In later years, he joined AFG Glass Industries where he loved working for over 15 years, never missing a day. Stitch was a devoted fan of Philadelphia sports and never missed a Phillies, Sixers or Eagles game. He spent hours watching cowboy movies; and although he never wanted to dance, he loved music, especially jazz and the blues. Sewell was married to his devoted wife, Betty, passing just two days before their 61 st wedding anniversary. They were blessed with three daughters, Dr. Sherrilynn Parrish, Barbara Hodges and Shawn H. Mathews. A ‘Girl Dad’, Sewell definitely delivered the fun. Throughout the years, we have continued to laugh at his enthusiasm for Easy Bake Oven desserts, gleefully eating them as if they were French pastries. He was also known for unexpectedly coming home from work with a new puppy or surprising the girls with a spontaneous beach day at the Jersey shore. Surrounded by women, we called him the ‘Pampered Prince’ who hardly ever had to lift a finger at home. Recently he began asking us to reheat his coffee in the microwave and would tell us...’set it to exactly 1 minute and 7 seconds’...we just laughed. Brother Hodges spent many decades as a member of Bethlehem Baptist Church, where he was dedicated to service. He was a Trustee and held the position of Secretary of the Trustee Board for many years. He loved being on the Board and took his responsibilities very seriously - showing up early to every funeral to ensure that everything was perfectly set up for the service; running the elevator each Sunday so church elders could attend service; and regularly meeting with service contractors to give them access to the church. He also led the committee to refurbish the church’s historic bell, which culminated in a celebration with Woodbury city officials. Brother Hodges had the honor of serving as Chairman for Men’s Day in 1996 which inspired him to form Bethlehem’s Men’s Fellowship Program where he especially enjoyed talking to younger men about his life path and the lessons he has learned along the way. Sewell was a generous and giving person who never wanted recognition or praise. If he saw a child in church who needed a winter coat, he bought one for them; if he noticed a church elder who needed extra money to attend a church trip, he quietly gave it. One day he saw an older man looking for food in the trash, we waited in the car while he circled back to give him some money; and recently we met a former church member who told us that Sewell gave him clothes when he had none. As usual, Sewell never told anyone that he had done this.​ ‘Stitch’ leaves behind to cherish his memory his wife of 61 years, Betty; his three daughters, Dr. Sherrilynn Parrish, Barbara Hodges and Shawn H. Mathews and two sons-in law, Lawrence Parrish and Troy Mathews; his four grandchildren, Ashley & Morgan Parrish and Averi & Carson Mathews; his sister-in-law, Barbara Pigford; his brother-in-law, James Hargrove; his Godson, Donovan Copeland; and his many nieces and nephews. On November 24, 2021, our heavenly Father called Sewell S. Hodges, III and summoned him to His eternal home. There are so many things that we’ll remember about our beloved husband, father, grandfather, uncle and friend. How he saved every Father’s Day and birthday card we ever gave him. How he loved sitting in the sun all day, no matter how hot it was. How he would take a long bath, with the fragrance filling the house, put on his pajamas & robe and slick back his hair...all to watch a big game on TV in the living room. How he loved hearing news about his children and grandchildren, and the joy he felt when he finally got that grandson that was so elusive in our family of women. You could see how proud he was that his grandson was left-handed and a pitcher just like him; and how - ever our protector - we knew that he would wait to leave this earthly home until we were not in the room with him, and he did just that. We will especially remember how much he loved us all. Most importantly, Sewell Hodges was a true believer in Jesus Christ and gave all honor to God from whom he drew his strength. May God Bless You, The Family of Sewell S. Hodges, III