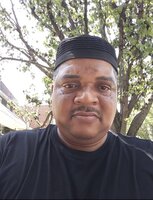 Gordon (Brahiem) Charles Coleman was born in Camden, NJ to the late Lois Coleman and George Young on March 7, 1963 along with his twin sister Gigi C. Coleman. He attended the Camden City School System and he was employed at Cooper Hospital, Our Lady of Lourdes Hospital and the Delaware Port Authority. He was affectionately known as Gordy Groove and Puerto Ric and the pioneer of the 1200 block of Morton Street. Gordy was a huge sports fan, his favorite teams were the The Philadelphia 76ers, Pittsburgh Steelers and The Philadelphia Eagles. Gordy was well known and loved by everyone. He loved to joke around telling corny jokes. He always had a nickname for everyone. He loved to play the lottery and stayed hitting the jackpot. He loved playing spades which he was very good at, He loved listening to his favorite music artist Teddy Pendergrass He leaves to cherish in his memory his children Shymira Slater (preceded him in death) Nahfee Nelson (Taheesha), Nahfea Nelson Nijah Kelly (Andrew), Aaron Jones, Amira Muhammad, Ashley Clinton, Kayla Gray, Jazmine Gray, Nathaniel Gray(Preceded him in death) Eleven Grandchildren Marajanae Nelson-Thomas, Dynasty Nelson-Thomas, Nahiem Smith, Emery Vasquez, Aniya Kelly, Ny’aria Nelson, Ny’asia Nelson, Donterrio Watson, Nevaeh Jones, Mazir Calhoun, Musa Calhoun, Kameron Martin, Karter Clinton. Twelve Siblings Derek Coleman (deceased), Darlene Coleman, Joan Coleman, Hank Coleman, Dywnn Coleman, Kevin Coleman(deceased), Gigi Coleman, Ronald Coleman, Juanita Coleman, Crystal Coleman (deceased), Darren Coleman(deceased), Tarik Coleman (Sister in Law Chris) Twins Mother Priscilla Nelson and a Host of Nieces, Nephews, Aunts, Uncles, Cousins and Friends. Sorrowfully submitted, The Family Poems O Allah, forgive Brahiem and elevate his station among those who are guided. Send him along the path of those who came before, and forgive us and him, O Lord of the worlds. Enlarge for him his grave and shed light upon him in it........Muslim 2:634 See Attachments for other poems Acknowledgements We the family would like to express sincere thanks and appreciation to everyone for your love, support, prayers and other acts of kindness shown to us during our time of bereavement. We pray God/Allah blessings upon each and everyone of you.